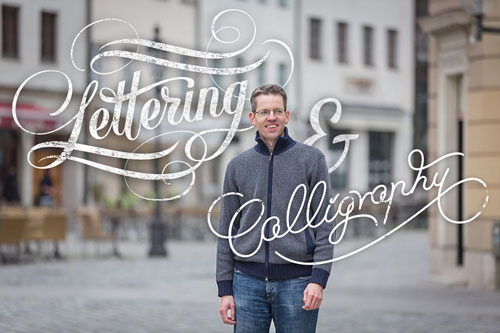 I am Robert, a graphic designer with a passion for handlettering and calligraphy. I’d like to help you by creating individual solutions for your design challenges. I excel in logo design with typographic oriented solutions such as logos, monograms, or any typographic artwork.

1995 Italy was always a myth for me, especially because we never traveled to Italy with the family. I was fascinated by the food, the fashion, the architecture, the old black and white movies and the life of an Italian family. I wanted to know if all this is real and what was behind it. So I went to Florence for six months.

The Italian culture and the spirit of an American art group inspired me so much, that I decided two years after my business school in Cologne to move to Milan. After my first working experiences in business and a half year in the United States, this was a real change for me. Moving to Milan for an indefinite amount of time

2005 After eight years in Milan and working in an advertising agency, the return to Germany felt like a new challenge. Munich was our destiny as it was the most italian city in Germany considering the lifestyle and being close geografically. As a freelancer I designed a monthly editorial magazine and supported other agencies with online and offline design jobs.

2012 was the first time I organized networking events with delicious food and beautiful ambience. In a well chosen locations, entrepreneurs met each other and engaged in good conversations.

2014 I started the mastercourse at seanwes and became a member in seanwes-community. Since then i committed totally to handlettering, bruslettering and flourishes. Then in 2016 I started hosting workshops in all three areas. In the meantime i conducted more than 100 Workshops in Germany.

2019 Every friday Sketchnoter Pavo Ivkovic from Cologne and i go LIVE doing the Coffee Talk. It is a conversation on IG-LIVE about creativity, life and good coffee.

2019 The team around Julia Winkler, Kathrin Vinko, Emma Mendel, Pavo Ivkovic, Johannes Belach and me are organizing the Lettering Days in Munich in October 2021. A creative conference of two days with a magnificent lineUp and a full packed programm.

2020 The first book i contribute some lettering compositions was published at the Frechverlag in november. It is a Bullet Journal for men. In collaboration with typedesigner Roland Huse (Hungary) i design my first Font. In 2021 “Roberts Script” Font became a font family with the regular version and the “new” light version.